The 3 best beaches in Madagascar 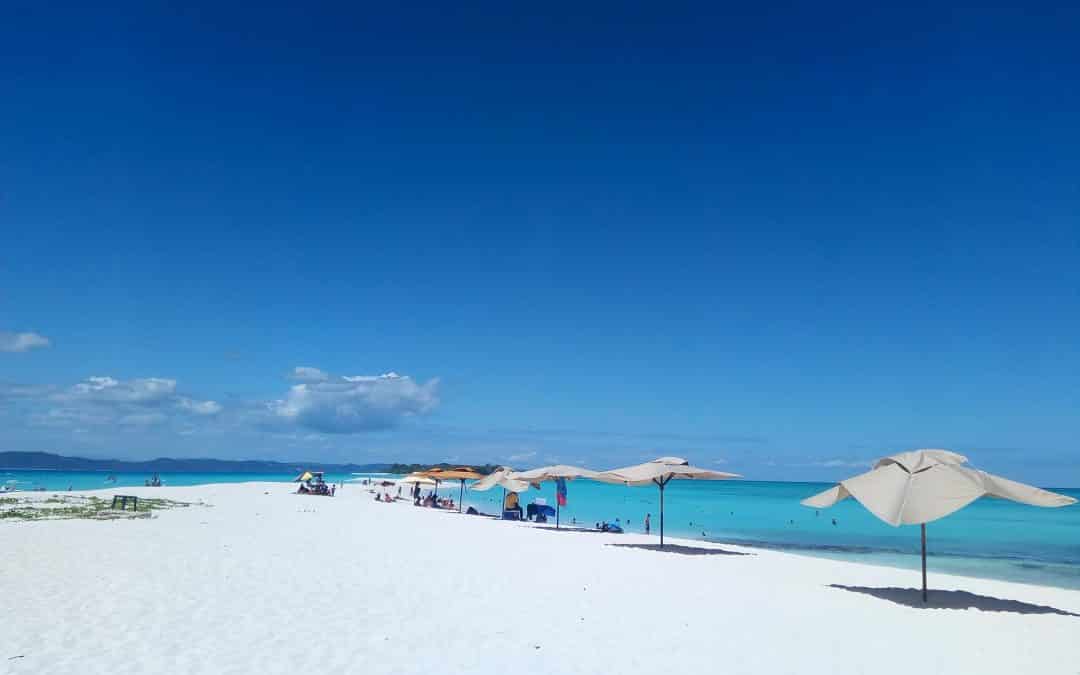 THE BEACH OF NOSY IRANJA

To those who want to play it like a Robinson, Nosy Iranja will be a perfect option with its paradisiacal landscape, its two small Virgin Islands and his long endless beach which crosses the sea.  Every day, visitors come to walk on the sand to live a unique and unforgettable experience.

Two small islands connected by the white sand bridge have their own specificity. The first one which is the biggest has two hotels, two fishermen’s villages and a lighthouse on the top of the island. The view from the lighthouse offers a magnificent panorama on both islands and on the sand bridge that connects them. The other one, Nosy Iranja the smaller one is still a virgin island.

On the site of Nosy Iranja, the nature is ingenious with the endless white of sands, the green of coconut palms and the vegetation of the island with as background the blue of the sky combined with turquoise of the sea. In brief, a real contract that will give the impression of being at the end of the world.

But the beauty of Nosy Iranja does not stop there. If you are a fan of bathing, the sea of the island is extraordinary and shallow.  Protected by coral reefs, the sea of Nosy Iranja is far from the sharks and far from any other danger.  If you continue this activity even farther and deeper, you will meet magnificent napoleons which evolve under the bottom coral.

Besides, the island is also known under the name of “The island of tortoise”. Indeed, Nosy Iranja is the favorite place of the sea turtles. The mother tortoises travel hundreds of kilometers to lay their eggs on the beach of the island. Leaving their eggs buried under the sand, the mother tortoises leave and never come back again. Far from the predators, the small sea turtles get out of their nests a few months later, arise in sand and directly go towards the sea for a perfect unknown destination in the Indian Ocean. So, if you are lucky, during your passage on the island, you will have the opportunity to attend this magnificent show of the nature.

Play it like a Robinson is the main activity of the island. That means the escape in a different world in the nature and surrounded by the sea. You can travel on foot the sand bridge connecting both islands with the waves caressing your foot. A boat trip will also be perfect to discover the island and its surroundings. Also, don’t forget to hike up to the lighthouse to have an overview of both islands. You should know that there is fishermen’s village on the big Nosy Iranja where you can go to meet with the local population. Finally, you can also visit another village in the bay of Barahamay, still on the big Nosy Iranja, where we build pirogue and dhows.

Situated in the North of Madagascar, Nosy Iranja is at two hours by boat from Nosy Be. You can go to the island by pirogue, by catamaran or by high speedboat.

There are two groundside infrastructures on the island if you want to spend a night there. Situated in the Grande Nosy Iranja there is a small lodge with comfortable bungalow that is not far from the sand bridge. Other groundside infrastructures let you rent equipments of camping. Besides, it is very feasible to leave early in the morning from Nosy Be, to spend the day on the island, back in the afternoon to return back to your hotels to Nosy Be.

The beach of Ankasy also belongs to the collections of the most beautiful beaches of Madagascar. A destination which is not still much appreciated by the travelers but very fascinating and is really worth a detour. The beach is situated in the South of Madagascar, at around ten kilometers from Toliara direction to the northwest.

Indeed, the beautiful beaches of Toliara serve as a point of relaxation for the tourists who have just traveled along the RN7 (Main road leading to the south from the capital). Before taking the plane for the return to Antananarivo, one or two days of relaxation at the beach will be perfect to end the trip.

The most chosen destinations by tour operators in Madagascar are often Ifaty, Anakao or Madiorano because of its easy access. But you should know that the beach of Ankasy is even more beautiful and is waiting to be discovered.

It is only accessible by 4X4, Ankasy reserves us big surprises which you will never forget. As a hidden destination, Ankasy preserves its originality and its authenticity in the wild state.

After a very mediocre secondary road and sand track, Ankasy finally appears with a panorama of white sand dunes combined with the blue sea. Some vegetations of bush, one or two fisherman’s pirogues navigating the sea, some local people who appear from nowhere with their cart of zebus and finally the turquoise blue of the Canal of Mozambique, these are the components of the incredible landscape of Ankasy. But the magic does not stop there because Ankasy still reveals you its most beautiful lagoons forming an even more spectacular landscape.

In brief, the key point of the beach is the beach itself because we will always want to contemplate the immense white sand beach, the emerald reflections of lagoons, pirogues which cross under the wonderful sunset.

Besides, at the end June until the middle of September, you can also observe whales during the season of the lovers. And, its fantastically wealthy submarine flora and fauna reserves you even more impressive surprises.

The destination will be ideal if you intend to have a luxury stay at one of the most beautiful beaches of Madagascar. If you are in honeymoon, the site will also be a better option for you. An infrastructure with luxury reception waits for you on the spot, so that you will have a unique stay. To do it, you can opt for a direct flight from Antananarivo to Toliara and the hotel takes care of your transfer by car from Toliara to Ankasy.

As a matter of fact, Ankasy is a great and small paradise for everyone who likes taking time to live.

Many kinds of activities will be suggested to you during your stay like the water-skiing, the catamaran, the dive and the apnea with mask and snorkel, windsurfing board, kayak, surfing, trip in pirogue or in high speed launch, fishing and observation of whales.

If you are not familiar with nautical sport then what about a long walk on the beach, bathing, bronzing or a moment of relaxation, massage and spa.

Finally, how about dedicating your day on doing nothing and simply take a break and relax, admire the endless landscape of emerald and have a nice cocktail.

Ankasy is in the South of Madagascar. After Toliara, continue your road leading to Ifaty. Always by pursuing the RN9, turn left by continuing on a secondary track followed by sand track. Always continue to the direction of South Manombo and shortly before Manombo you can finally admire the beautiful landscape of Ankasy. You have two choices to get to Ankasy, either you cross the RN7 to finally relax in Ankasy or you can take a direct flight from Tana and then transferred by car to Ankasy.

A single groundside infrastructure of reception is on the spot, one more reason to confirm that it is a distant destination isolated from the rest of the world. The hotel is named like the site: “Ankasy lodge “. A luxury hotel, the overnight stay costs from 90$. The hotel possesses 9 bungalows installed at the beach, in front of the lagoons. The transfer costs from 40$. The hotel proposes numerous activities with a nice restaurant.

BEACH OF BELO ON SEA 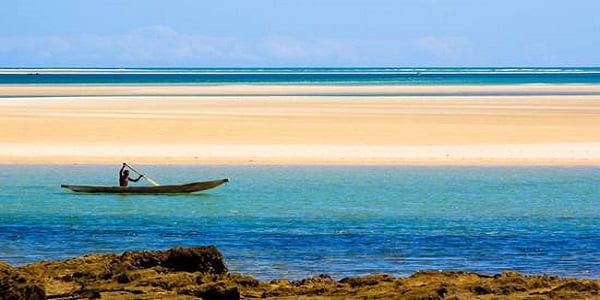 DESCRIPTIONS OF BELO ON SEA

A pleasant small Vezo village lined by a long beach with translucent water, “Belo sur mer” is an excellent destination for those who are looking for an exceptional site combined with beautiful local meetings. Situated in the canal of Mozambique, the sea is unstable, sometimes high sometimes low, so the thousand landscapes can appear and disappear on the beach.

Besides, the bay of Belo is really magnificent, with beautiful sunset and the very quiet atmosphere. The shade of coconut palms and the sound of waves give an impression of an eternal vacancy.

But this heaven on Earth of “Belo sur mer” is not only at the beach. Indeed, the site is also decorated by a magnificent archipelago such as Nosy Tania, Nosy Andriangary, Nosy Androvoho and many others.

Set apart the paradisiacal landscapes and the beautiful meetings, try not to miss tasting the typical food made with local products of the region like seafood rizotto, fish carpaccio with bright pink, home-made punch coco, the grilled spiny lobsters, seafood platter with oysters sea urchins, shell and seaweeds. As dessert you will have honey of baobabs or even better the good banana muffins. A real delight.

During your stays in “Belo sur mer” you have a wide choice of activities like boat trip and the excursions on the small islands; fishing, the visit of Ambararata where you can meet lemurs, in particular the sifaka which sneak between baobabs; the visit of Ankoasikafy where you will have the opportunity to meet the fosa; a hike in the national park Kirindy Mitea where you can discover zones of lakes, 7 small islands, one river lined by mangrove, Baobab forest, a beautiful beach and of course, a very rich ecosystem.

Besides, you can also have fun by relaxing at the beach, by mixing with the local population, having a beautiful day by admiring how craftsmen build a pirogue, or simply talk and exchange with the other tourists on the spot. In brief, a day of relaxation with the rhythm Mora Mora in Malagasy style.

There are two ways of going to Belo on sea. The first one is by car but the road is only feasible during the dry season which is at the end of April to November. From Morondava, traveling by vehicle 4x4, it will take 3 to 4 hours.

Besides, the destination is also available by boat from Morondava. But be careful, if the sea is shaken it is no recommended. For a trip by pirogue or in dhow, the route will be done in 6 hours of time. By motorized launch, the route will be made in 3 hours.

During your stays in “Belo sur mer”, you can contact the hotel of Menabe, the Dauphin Vezo, the ecolodge Hutamac or even better the Entremer hotel. Each of these infrastructures of reception proposes rooms and bungalow with comfort. The price of overnight stays is from 50$. These hotels can take care of your transfer to Morondava by boat or by 4X4 and price varies between 70 – 120$.

Do you  want to see other blog about travel, you can <a href=”http://www.traveltourismdirectory.info/Accommodation___Lodging/Timeshare/”> Visit Timeshares </a>